“It’s a great lab and far better than the first. I believe this is a significant gain to our school and will definitely aid in sharpening our computer literacy skills,” stated fourth form student Tyrese Lindsay.

THE STUDENTS of Penwood High School are now boasting the acquisition of a newly constructed state-of-the-art information and communication technology centre. The school held its official opening ceremony of the centre in the auditorium under the theme ‘Creating Vision, Enacting Change, Moving Forward,’ on Friday, October 4. 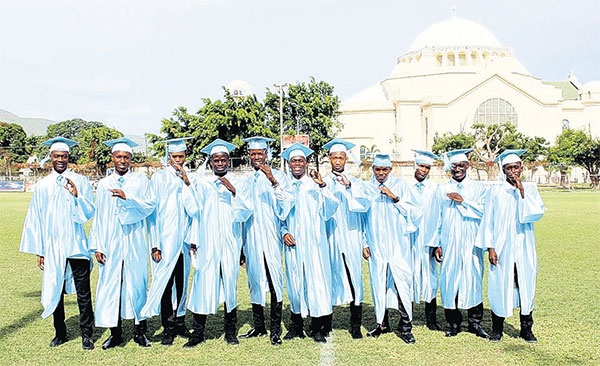 On Sunday, September 1, 2019, St George’s College launched the celebration of its 170th year with a Mass of the Holy Spirit, held at The Cathedral of the Most Holy Trinity. Mass was celebrated by the Most Rev Kenneth D. Richards, DD, archbishop of Kingston. He was assisted by visiting Bishop of the Keta-Akatsi Diocese in Ghana, the Most Rev Gabriel Doe Kumodji; the Very Rev Christopher Llanos, SJ, regional superior of the Society of Jesus in Barbados, Guyana and Jamaica; Rev Fr Rohan Tulloch, SJ, acting Jesuit superior and chairman of the board of St George’s College; and other priests and... read more

THE GLEANER’S Youthlink hosted the 19th staging of its annual CSEC seminars on April 3, 2019. The event was established to highlight challenging topics students may face in the upcoming examination period and prepare students to tackle these topics as best as possible. Habitually, the five-segment seminar would commence in Savanna-la-Mar then on to Montego Bay. This year’s seminar saw over 400 students participating. Students also got the opportunity to compete in fun math and English competitions to win prizes, courtesy of Youthlink, and also showcase their talents as DJs. Andrea Hill,... read more

THE GLEANER’S Youthlink continued the 19th staging of its annual CSEC seminar on April 5. As with all the other seminars, the main goal was to highlight these challenging topics students may face in the upcoming examination period and preparing them to tackle these topics as best as possible. Routinely, the five-segment seminar commenced in Savanna-la-Mar then moved to Montego Bay for the western sections. Ocho Rios initiated the seminar for the central areas of the island.

Students got the opportunity to compete, as always, in exciting maths and English competitions to win prizes,... read more

ON Tuesday, April 2, the institution on Monk Street, Spanish Town, lifted the Schools’ Challenge Quiz Cup for the fifth time in the 50 years that the compe-tition has been in existence.

The match started with the Opening Challenge, during which teams answered questions alternately.

Kingston College ended the round on eight points.

The second part of the... read more

Five top performers in the Rita Marley Foundation (JA) Annual Essay and Public Speaking competitions were special guests of the president of University of Technology, Professor Stephen Vasciannie, and the principal of The University of the West Indies (UWI), Professor Dale Webber.

Students engaged in discourse on various educational and social issues at a round-table meeting with Professor Vasiciannie. When Westwood High School’s Wendy-Ann Ivey (second-place winner – Public Speaking Competition 2019) posed a poignant question about what advice he has given to students which they did... read more

KATALYXT IS a division of Mint Management and Finance Services Limited with the responsibility of aiding the growth and development of small and medium-size enterprises in Jamaica. The long-term goal is to develop the Jamaican business community by identifying and training existing and prospective entrepreneurs in order to increase their chances of success.

This year marked the eighth staging of the annual Katalyxt Youth Innovators’ Competition. Young innovators from third to sixth form are targeted for participation and the objectives of this competition include:
1.... read more

A group of 11 students from Jamaica College (JC) who were ranked best at building their own robot, travelled to the United States of America (USA) to compete against their peers from across the world. JC won the local leg of the inaugural FIRST Tech Challenge National Robotics Championships in March, emerging ahead of other top high schools.

They qualified for the space-themed FIRST Tech Challenge World Championships, dubbed ‘Rover Ruckus’, which was held in Houston, Texas, from April 17-20. The JC boys were part of a larger group vying for the prestigious Inspire Award, which... read more

With the big examinations not too far away, Youthlink has been working fastidiously with teachers and students in exam preparation via the Youthlink CSEC Seminar. Youthlink closed the series of workshops, previously held in Westmoreland, St Ann, Manchester and St James, with a successful seminar at The Mico University College in Kingston on April 10. Students and teachers came in large numbers from Pembroke Hall High School, the Cedar Grove Academy, and Ascot and Ardenne high schools to participate in the day’s learning. The Gleaner Company’s Sherilla Gordon hosted the days’ events,... read more

ON Tuesday, April 2, the institution on Monk Street, Spanish Town, lifted the Schools’ Challenge Quiz Cup for the fifth time in the 50 years that the competition has been in existence. The match started with the Opening Challenge, during which teams answered questions alternately.

Kingston College ended the round on eight points.

The second part of the match was... read more