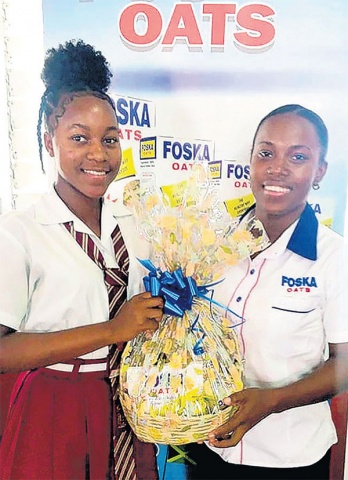 This week, the Foska Oats brand, a product of Chas E. Ramson Limited, brings a special element to the Made in Jamaica series. As a product that was originally manufactured in Denmark, Foska Oats represents the power that time and wholehearted community engagement have in making something our own in Jamaica.

Foska came to Jamaica in the mid-1960s after Jamaican Lauritz Ramson entered into a joint-venture agreement with the Kellogg’s company to start manufacturing the oats here in Jamaica. Once Foska Oats became a local entity, it joined the Jamaica Manufacturers and Exporters’ Association (JMEA, formerly the Jamaica Manufacturers’ Association) and through that association, became involved in the ‘Buy Jamaican ... Build Jamaica’ campaign.

“It really ingrained us in being a Jamaican product. When you look at the history of Foska Oats, it has always been associated with family-oriented, sports-oriented activities; and even in the medical field, oats has always been touted as being good for you medically. So, through supporting associations like the Diabetes Association, Heart Foundation, we have really aligned ourselves with being family-oriented, health conscious through all those sports. For years, we did one of the first road races through Foska 12K, 5K, 2K and we even did a 1K for the small kids, so we ensure we cover all the bases.”

Foska is now the only locally produced Jamaican oats.

The brand has been consistently active in community involvement, organising community interactions all over the island. These interactions are created through the likes of the Foska-sponsored Six-a-side Football Tournament, in the Waterhouse community. Ramson described it as a way of giving back. “Sometimes the bigger companies forget about these small communities, and just giving a little bit [with something] like a six-a-side tournament went a tremendous way for the community.”

Foska also recently got involved with the Social Development Commission T/20 islandwide cricket tournament which involves approximately 375 different communities around the island. Foska not only sponsors tournaments, but also organises giveaways and engages the people within the communities.

Other acts of community involvement are achieved through collaborations with the Melbourne Cricket Club (MCC), the Pig Farmers’ Association, the Rio Cobre Juvenile Correctional Centre, and the ‘We Inspire Girls’ organisation, which partnered with Foska to tour girls’ schools around the island. Katherine Silvera, advertising and marketing manager of Foska Oats, revealed a bit of Foska’s motive behind the nearly three-year partnership with We Inspire. “We really took this on as an initiative because we believed that we needed to help inspire young girls to achieve their dreams.” The programme sought to enrich the minds and bodies of the girls in the 14 schools involved in the tour. Speakers offered motivation while the brand representatives provided information on not only the nutritional benefits of Foska’s products, but also on the potential to be achieved through associations with locally produced brands like Foska, which employs a significant number of female employees.

Brand Manager Marsha-Lee Stewart elaborated on the importance of the We Inspire visits to the rural schools. “A lot of the time, rural schools don’t get a lot of attention from bigger brands, and they don’t get the opportunity to be visited and to be given a real connection with persons [like] the brand manager and persons that work with the company, so this was very educational for them. It was also good for them to see women very empowered in leadership roles that they could now aspire towards and think, ‘Okay, yes, I could do this too’ or ‘I could reach that goal’ as well; so that was really good.”

Along with its undeniable commitment to community, Foska also remains steadfast in its dedication to consumer satisfaction through product improvement, expansion and innovation.

Ramson revealed that the younger consumers, especially, can continue to look forward to products to suit their lifestyle. “We recognise that being health conscious is not the only thing that we could focus on. Nowadays, people’s most precious commodity is their time, so with that we saw a natural line, extension into the instant-product line, which would have been instant oatmeal. Now, even more recent, our instant cornmeal.” These products come with their own cup, designed for consumers to ‘just add water’ and achieve the authentic products Foska is known to produce. “I think that that is somewhere we’re going see ourselves continue to grow. If we can cater to the students who have very little time, by using this instant porridge, I think that’s where we’re going to go.”