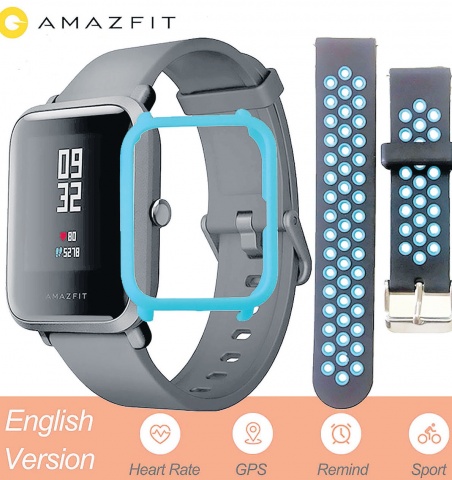 A smartwatch is an ultimate must-have phone accessory; since it does more than synchronise to a mobile smartphone, then it is an added bonus. Think of a fusion of a fitness tracker or band with a phone and a digital watch – you’ve got a fashionable activity smartwatch like the Amazfit brand designed by China-based developers Huami.

One week with an Amazfit Smartwatch and it’s going to make any fitness fan dependent on wearing it, and make the regular self-challenger feel more motivated to accomplish fitness goals.

The brand was launched five years ago and now boasts more than five models. Two of the most affordable, the Amazfit BIP and Amazfit Pace, have standout features that any adolescent with an interest in fitness would enjoy. Contrary to the expectations, this brand of smartwatches, at the level of its basic features, does what it is supposed to do.

Since a prospective buyer may not be able to compare, let Youthlink take you through the good, the bad, and maybe the ugly, of the two.

• Design: Unlike other watch designs, the rectangular face and complementary silicone soft band is actually suited for both genders. Even though, at first sight, the design is a bit basic, it doubles as a selling point for the individual that focuses on function over fashion. The onyx-black style is attractive and there other bands, including a nylon sport and a genuine leather one, being advertised online.
Rating: 3.5/5

• Mobile compatibility (software): The Amazfit BIP synchronises quickly with both Android and Apple mobile devices with its corresponding Mi Fit app. However, the software still needs a bit of work. Navigating it may take a little while, but it gets quite easy to understand as it colour-codes information like your heart rate; this makes the information more palatable.

It allows the user to set goals – like the number of steps per day, with the recommendation that 8,000 steps per day is best for keeping fit. The always-on display is commendable, speaking as an individual who prefers to be able to read a watch without having to touch it. The heart rate is always on and is displayed below the time. The software interface is a good record-keeper for the total number of steps per day. It even has a sleep tracker and, at the end of the week, users can review their statistics. There’s no need to even re-synchronise unless it is that you accidentally delete the app from your phone; nonetheless, the data has been saved.
Rating: 4/5

• Most attractive feature: The battery life deserves a round of applause. This was my routine for one week of continuous usage: one-hour daily session at the gym, sleeping while wearing the device, plus other fitness activities such as jogging. Surprisingly, at the end of the week, it only showed 23 per cent of the battery life used. It can easily be assumed that the 30-day use without needing charge will be guaranteed.
Rating: 5/5

• Design: The main orange-and-black style of the Amazfit Pace may be considered a little more on the masculine side by some persons, but it still has a unisex appeal. It is not heavy, despite the large, circular body or the thick bands which give the idea that it may be. On the contrary, it is very comfortable to wear.
Rating: 4.5/5

• Mobile compatibility (software): It takes a while to synchronise with a mobile phone, but it gives the user the option to do so using a generated QR code. Instead of the Mi Fit application that the BIP model uses as its interface, the Pace model coordinates all data via the Amazfit Watch mobile application available. It is an improvement to the Mi Fit mobile app; however, it works with less occurrences of glitches on an Android phone (tried with a Samsung Galaxy) than the Apple phone (iPhone 6S+), where it functioned a bit slower with answering call alerts.

The bold face and text are good features, especially if fine texts prove difficult to be read for the user. The widgets are also a plus, which makes it easier to manipulate the functions, and the actual layout is easy to read. If the phone is far away, all the data is stored within the watch and synchronised once in range. Unfortunately, battery life is significantly less than the Amazfit BIP and lasted just under five days.
Rating: 3.5/5

• Most attractive feature: Well, there is no selecting one attractive feature. The first notable feature is the GPS-tracking; the second is the ability to download music to the watch. According to Huami, up to 500 songs can be stored to the device.

You can actually connect a pair of Bluetooth headphones and listen to music from the watch instead of your phone.

It is a fitness tracker, watch and music player all in one; but if you are going to use all the features, you’ll have to compromise on the battery life.
Rating: 4.5/5