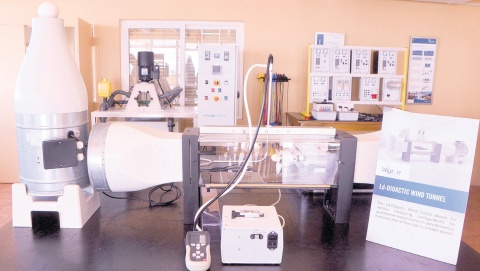 The Ld-Didactic wind tunnel is a learning aid for students measuring configurations for qualitative experiments.

WIGTON WINDFARM Limited, a subsidiary of the Petroleum Corporation of Jamaica, is a catalyst for change as it engineers Jamaica’s transition from fossil fuel dependency. To date, the state-of-the-art facility has saved Jamaica approximately $54 million and alleviated the need for approximately 65,000 barrels of oil per annum. With cutting-edge research and continued training, that number is set to increase steadily in the coming years.

The ultimate tool should one ever need to prepare for Armageddon. The solar cooker uses parabolic technology that reflects the sun’s heat energy, regardless of where it hits the parabola, to a single focal point. In other words, all sunrays that are parallel to the axis of the parabola are directed towards the central receiver. That receiver then directs the heat upwards, similar to the average stovetop cooker. Students at the resource centre have access to a complete fleet of renewable products and training aides.

Visually engrossing, the massive motor commands most of the space around this device. The attached motor generates simulated wind speeds which rotates the blades on the small turbine inside the wind tunnel. This allows the aerodynamic profile to be measured. The device also allows the angle of the blades inside to be changed via the Digital Tread Depth Gauge, with the aim of gaining insight on how different angles and wind speeds affect power production. Students are able to create a table and plot a power curve of the average wind turbine. Participants in the just-concluded course in March 2019 gained first-hand experience using this model.

HYDROELECTRIC MICROSTATION MP3000B
In essence, this is a mini hydro plant. The device is equipped with a large tank that simulates the water source and a pump or motor to create movement (kinetic energy). The micro hydro power plant pumps water to generate electricity. The power generated can be grid-coupled (grid-tied). This means it can be attached to the grid at the same frequency or [be] a stand-alone system. It transforms kinetic energy into mechanical energy that is then converted into electrical energy with the use of a generator. The readings – volts watts and even the power factor – are displayed on an attached control unit. The pressure and flow controls can be altered to create different scenarios of low water flow versus heavy water flow and their energy outputs. It is a definite favourite for engineering students who take advantage of Wigton’s training opportunities.

The system imparts expertise on the topic of photovoltaics during training exercises at Wigton. It can be used to study the characteristics of solar cell and wind energy. This instrument provides basic testing of solar panels. It records characteristic curves and can even calculate the efficiency of the test panel. It can also replicate a stand-alone system and displays a full diurnal (daily) cycle.

With three training courses set to come on stream this year, May 27 – 31: Introduction to Solar Energy Technologies and Energy Audits; July 22 – 26: Photovoltaics (System Design) and Fuel Cells; and October 26 – November 1: Photovoltaics and Bioenergy, there is no shortage of opportunity to win with Wigton.