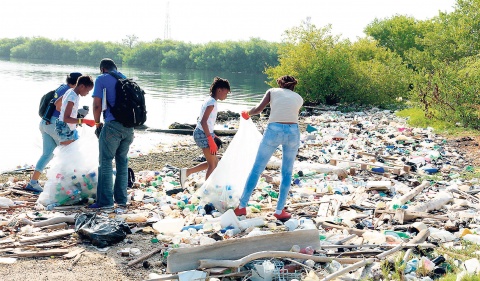 THE JAMAICA Environment Trust (JET) is reporting that seven truckloads of garbage were hauled away from its 2018 International Coastal Clean-up (ICC) Day, a flagship event undertaken at the Palisadoes go-kart track in Kingston. The event was JET’s 25th annual beach clean-up of the Palisadoes strip marking ICC Day, which took place on Saturday, September 15. More than 1,700 volunteers joined JET on ICC Day 2018, collecting more than 1,000 bags of garbage weighing an estimated 15,488 pounds from the Kingston Harbour coastline.

The number one item collected at the clean-up was plastic bottles. Two truckloads of plastic bottles weighing an estimated 1,900 pounds were removed from the go-kart track for reprocessing by Recycling Partners of Jamaica (RPJ).

“Over 36,500 plastic bottles were collected by volunteers at the go-kart track on ICC Day this year,” said Tamoy Singh Clarke, JET’s programme director. “This is the largest number of plastic bottles JET has ever recorded at a single clean-up site in Jamaica since we began coordinating ICC nationally in 2008.”

Rounding out the top 10 items collected by JET volunteers were many other common plastic and foam products, including plastic bags and styrofoam food and beverage containers.

“This is the first time JET hosted a clean-up on the Kingston Harbour side of the Palisadoes Strip, and it was really an eye-opening experience for many of our volunteers, who confronted Jamaica’s garbage crisis head-on,” said Clarke. “Most of the garbage removed from the go-kart track originates in the streets, drains and gullies of Kingston, where it  is carelessly discarded or illegally dumped. All it takes is one heavy afternoon downpour to wash Kingston’s garbage into the Kingston Harbour from where it floats across to the Palisadoes coastline,” she continued. Some of the other items collected at JET’s 2018 clean-up included two refrigerators, five televisions, four traffic cones, 871 shoes, 56 toothbrushes, several car parts and small appliances, a wheelbarrow and a store mannequin.

JET has also confirmed that in excess of 150 other beach clean-ups also took place across Jamaica on ICC Day this year – from Morant Point Lighthouse in St Thomas to Negril West End in Westmoreland. Between July and August, JET successfully recruited 99 local groups to stage the 2018 ICC events in Jamaica on September 15. ICC Jamaica continued to be supported by the Tourism Enhancement Fund (TEF) in 2018; TEF was also joined by RPJ, Jamaica Energy Partners, and several other corporate sponsors to support JET’s staging of ICC Jamaica this year.

“Over the next few weeks, we will be compiling data from the other clean-ups which took place to produce the national ICC report which we release in January each year,” said Suzanne Stanley, JET CEO. “International Coastal Clean-up Day not only raises awareness among Jamaicans about how much of our garbage ends up in the sea, it also gives us data to illustrate the magnitude of Jamaica’s plastic pollution problem,” she noted.

The release of the data from JET’s 2018 beach clean-up comes less than a month after an announcement from the Jamaican Government that a ban is to be imposed on single-use plastic straws, plastic shopping bags and styrofoam food and beverage containers, starting January 2019. “The ban is a positive step towards Jamaica’s waste
stream becoming more biodegradable in composition,” said Stanley, “but as our 2018 clean-up data highlight, there is still an urgent need for a strategy to tackle the waste generated by plastic bottles in Jamaica. We look forward to the Government’s announcement on the plastic bottle deposit refund scheme, which has been promised for later this month.”