Rev Swaby would be proud 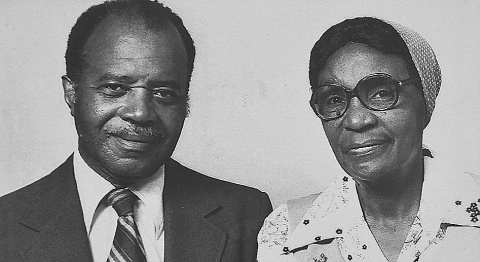 A photo of Iona’s founders, the Reverend Herbert Swaby and his wife, Gwendoline.

When presbyterian Minister the Reverend Herbert Swaby and his wife, Gwendoline, founded Iona High and Prep schools in Tower Isle, St Mary, in 1949, the vision was to establish a nurturing environment mainly for boys. In January 2019, when celebrations begin for the school’s 70th anniversary, the administration will no doubt look back and see how far the instution has come – from four students at the start, to 840 currently on roll .

“Reverend Swaby would have been proud,” suggested viceprincipal Joan Peart-Armstrong. “What I understand about his vision was that Iona would be a nurturing environment for boys. Our present principal (Melva Humes-Johnson) is in the corner of the boys, so sometimes even when they’re behaving badly and in other environments they might have been excluded, she bends over backwards to try to hold on to them.

“We are into transforming lives and so, although we want them to come to us disciplined, they are not always disciplined, so the transformation that we’re doing, we have to recognise all of that and take a hand in the social part, the part that we might not feel is our department,” she continues.

There have been outstanding moments, academically, over the years.

In 2005, Kenhia Fund Chung was outstanding in the CXC examinations, emerging as the top student in science in the region. The following year, Derron Pottinger also did extremely well. Both drew commendations from then Education Minister Maxine Henry- Wilson, who hailed them as she handed over a new block at the school in January 2007.

“Over time, we set bars for our students and they have come up to meet the requirement, so now we are a school of choice. Our food lab does not have a lot to offer in terms of infrastructure, appliances and so on, and the space is limited, but our passes in food are always 100 per cent or pretty near to 100 per cent.

“Our students, when we get them, they might not be disciplined or able to perform, but over time, we help them to realise their true potential. I remember a GNAT student who came in at grade nine and by grade 10, based on academics, we saw his potential and we tried to guide him in the right direction, and he was able to become head boy at grade 10; and now he’s a high-ranking member of the army and married to a past student.”