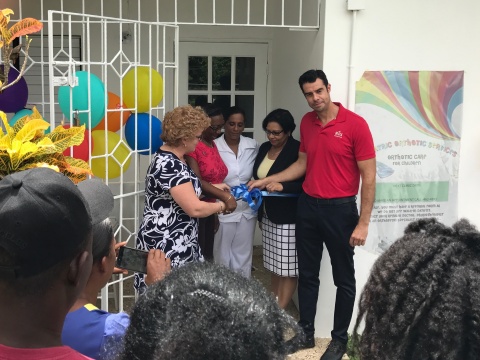 In the nine years since it opened, the Paediatric Orthotic Service in Negril sponsored by RIU Hotels & Resorts, has treated and monitored 260 Jamaican children with mobility problems. The hotel chain was responsible for the clinic’s creation in 2009, when it hired a nurse, an administrator and a technician with a view to improving the care that children with special needs receive, and it has continued to contribute to the local Jamaican community by renting and maintaining the clinic space. RIU has also supported volunteer orthotic specialists from the United States and Canada who collaborate with the clinic by offering them free accommodation in its hotels during the four annual missions they carry out in Jamaica.

With the help of local volunteers, and in particular Elaine Allen-Bradley, retired nurse and member of the clinic’s organising committee together with Jim Willese, this service offers orthopaedic equipment, therapy and care to children with weakness in the lower limbs, skeletal deformations, spasticity (multiple sclerosis, spina bifida, cerebral palsy) and walking difficulties (gait stability). Most of the children are from deprived socio-economic background and could not have afforded this care. The Paediatric Orthotic Service in Negril is the only one of its kind on the island and it is free to all who needs it.
This solid local team is joined by a group of orthotic (braces feet) specialists from the United States and Canada. One of them is Dawn Turner who has performed treatments at the clinic since 2010 and sometimes travels with her husband Scott and their daughters Kaitlin, Maddie and their son Zack, who collaborates with local technicians like Nicola Smith. Another specialist is Gabriel Beversluis from Kentucky who was in Jamaica last November with his wife Jodi and Lori Watson, founder of KeepingPace.

"It is wonderful to see what can be achieved when bringing together such a diverse team who are all focused on a single goal.  When each of us recognize that we have something to offer and are willing to get involved, incredible change can occur. Because of RIU's support, this clinic has been able to permanently improve the lives of hundreds of Jamaican children and their families", says Gabriel Beversluis. For nine years, all the teams that have visited the island have raised the standard of health treatment for Jamaican children, and in particular those with orthopaedic injuries or deformations that prevent them from leading a normal life.
At the beginning of every mission, the specialists arrive to Negril with a cargo of orthopaedic shoes, paediatric walking aids, special stockings and all sorts of orthotic equipment designed for children and tools needed to adjust the prosthetic material. Many of these prostheses are donated by friends or patients of the specialists’ clinics: Customs Orthotics of London (Ontario), the Mary Free Bed Rehabilitation Hospital in Grand Rapids (Michigan), the Bluegrass Bracing Pediatrics in Kentucky, SureStep Orthotics in Indiana, KeepingPace among others.

This collaboration by RIU Hotels & Resorts forms part of the Social Action Plan created by the company’s Social Responsibility department. An essential part of this plan is the company’s integration in the communities of the places where it operates, in order to contribute to the improvement and greater well-being of its social environment. It also helps to generate opportunities for social and economic development by establishing a collaboration strategy with social organisations, with the following lines of action: community support initiatives, biodiversity projects, child health and well-being programmes and the donation of rooms and services.