Grace brings Flava With A Beat  to Excelsior High School 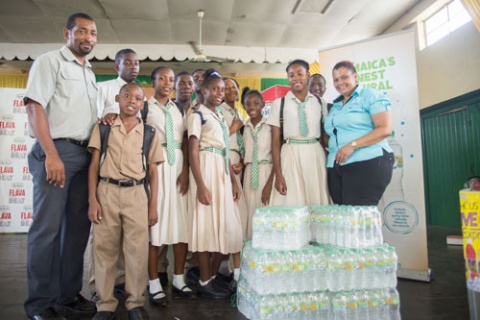 The Grace Flava With A Beat Champs School Tour is on the move and made its second stop at the Excelsior High School on Wednesday, February 7. MC Badda Bling, the Grace Flava-full dancers and the Grace team kept the energies high with competitions, lyrics clashes and giveaways from the sponsors, Grace Lishous, Grace Franks, and 876 water.

As the doors of the Excelsior High auditorium opened, the students rushed in their numbers to join the fun and festive stage activities. Throughout the afternoon, the students participated in various competitions such as the 876 lyrics clash, the Lucozade relay, Grace Food Drink fashion show and the strong man competition. Of course, lots of prizes and giveaways from the sponsors enthused the student body and ensured maximum participation and vibes from the crowd.

This week the theme “Positive Thinking, Positive Expressions” was shared with the students of Excelsior High and Karen Mussington, Senior Brand Manager, Beverages had this to say about the chosen theme for the tour.

“Grace has been around for 95 years and because of what we mean to Jamaica and our values as a company we believed that “positive expressions” would be an ideal message for the students in terms of having a positive attitude towards life despite what may be happening around them, positive energy and a positive outlook. Just by thinking positively things have a better chance of working out and we wanted to encourage and share that message with the schools.”

The Grace Kitchen team was also on the ground and served up some delicious dishes for the students and teachers at Excelsior High. Angella Grandison Reid, Consumer Services Manager, Grace Kitchens shared her experience.

“For this tour we included a high potency punch, using our Grace Oats, Grace Food Drink and also Vita Malt from our sister company World Brands and I can tell you if you saw the line, it was all the way to Mountain View. The demand was so great. We also had our Grace Food Drink served with our Grace Corn Flakes, Grace Corned Beef with pasta, and our corn and mixed vegetable cook-up. And to refresh the school, we had on hand Lucozade, 876 Water and Lishous! The food was excellent, as a matter of fact, the line is was still there even after school had been dismissed but the students just did not want to leave the food! It was  like lunch time all over again and the Grace team were happy to serve the student body.”

Colleen Walker, Vice Principal of Excelsior High shared her thoughts on the Grace Flava with a Beat Champs School Tour.

“I think it’s such an awesome initiative. I am seeing where it is helping the kids to support what is happening in terms of Champs and to gel together and really for them to express themselves and some of the things they know. I mean, I’m listening to students telling us how they cook Mackerel for example, and I mean, ordinarily they wouldn’t have done that. So it is really exciting, and I really think it helps not only Excelsior but other schools.”

We caught up with the coach, David Riley, Technical Director of Track and Field at Excelsior High to find out some fun facts:

Our next stop will be at the home of the reigning champions of the ISSA/GraceKennedy Boys and Girls Championship, none other than Calabar High Cchool, where Grace will be bringing you Flava with a Beat!