Faith refuses to slow down despite cerebral palsy 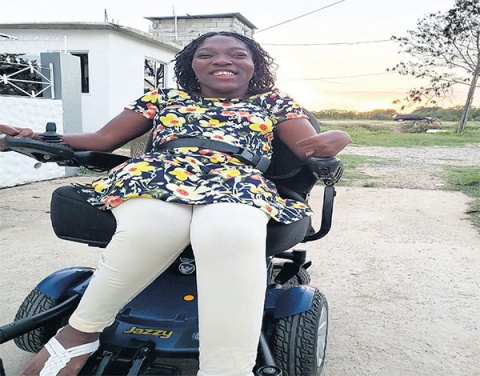 TO OVERCOME many of the obstacles life throws at us, Susanne Henry believes the most important thing we need is faith. It’s also the name given to her daughter, Faith Grant, who was born on July 13, 2000.

“She was born a bit premature at 28 weeks and weighed 2.5 pounds, which is less than a three-pound chicken. On her third day, her entire body was yellow because her liver was not functioning properly, so they had to take her from Nuttall to UWI intensive care,” revealed Henry.

The distraught mother, who had been discharged from the hospital, could only wait with the anticipation that things would get better. However, after a couple of blood transfusions, Faith’s situation was not improving. “The doctors were puzzled as to why her condition was not getting better, and so I really started to worry. I remember calling my pastor and asking him to pray for her before her next transfusion. Miraculously, the surgery was a success and she was sent home two days after without the need for any medication,” an elated Henry stated.

Happy to have her daughter home, Henry capitalised on the opportunity to bond with her. Nonetheless, after six weeks, Henry noticed her daughter’s motor skills weren’t as they should be.

“She wasn’t sitting up properly and she wasn’t making any hand movements, so I decided to take her to the paediatrician, where she was diagnosed with cerebral palsy.”

Cerebral palsy (CP) is a condition where some areas of the brain do not function properly and, consequently, this affects the fine motor skills such as moving, talking and walking. Therefore, persons with CP may not talk fluently or move around without the aid of a wheelchair.

During the doctor’s visit, Henry was at a loss for words as she knew very little about the condition. However, the doctor assured her things were going to be OK.

“The first thing she told me was that CP children are bright, so I must not isolate her. She is going to function a bit differently, but there is nothing she can’t learn.”

Henry heeded the doctor’s advice and tried to normalise Faith’s upbringing by buying her toys such as a tricycle, which she would ride around their yard. She was also sent to rehab to sharpen her motor skills. However, due to financial constraints, it was challenging for her to continue.

“She was doing rehab twice a week, but the sessions were very expensive, so I had to stop her. I also tried a programme at Mona Rehab, but the logistics of getting there from my work was too difficult on me, so that didn’t work out, either.”

None of these experiences deterred Henry, who enrolled her daughter in a primary school that catered to special needs. “At this age, she couldn’t write properly, but she found creative ways to communicate. She knew all the concepts, so I asked them to advance her to a higher grade that matched her learning potential, but they said no.”

Frustrated by the school’s inability to meet her child’s needs, Henry moved Faith to Hydel Preparatory, where she was welcomed with opened arms.

“The school and the students were so accommodating to her. I think she was one of the first wheelchaired children there.” This love was most evident in grade four, when Faith’s teacher, Mrs Strachan, would find ingenious ways to motivate her and incorporate her in the class lessons.

“She can write what is on the board, but she can only speak five per cent of the content, so she does a lot of pointing.”

Eventually, as Faith got bigger, her mother had to hire an assistant who would help to push her wheelchair, take her to the bathroom and collect her lunch. Despite it being a costly endeavour, it was necessary, as Faith was becoming more involved in school activities.

By grade three, Faith had to do a hip-dislocation surgery. This kept her out of school for five months, as she was bedridden and in a body cast. However, her family was determined to not let this have an adverse effect on her academics.

NOT GIVING UP FAITH

“We would have to take turns and get her notes from school, then come home and go through it with her.”

All this sacrifice paid off when she sat her Grade-Three Literacy Test and got a 90% average, which served as a strong sign of inspiration for all who helped. She also encountered similar success with her Grade-Four Literacy Test. However, by the time she made it to grade five, the school found a discrepancy with her age.

“We found out she was too old for grade five and she had to go to grade six instead. This was rough; it was a big jump for us.”

As predicted, the course content was too much for Faith, so her mother asked for her to be excused from school as she had found a private tutor for her.

“In the end, there was just too much for her to learn in such a short time, so she did her best, but her final GSAT results were not high.”

Initially, she was sent to a school based on the Government’s zoning system; however, it was not equipped to deal with her disability. Subsequently, her mother wrote to Ardenne High School and asked if they could accommodate her daughter based on her condition. Fortunately, they relented and her journey at the school started.

“From the get-go, they were very welcoming. They went ahead and started building ramps wherever needed. Some of the teachers were also sensitised about her, so they were very kind to her.”

With the school doing all of this, Henry now had to contend with the strenuous journey of driving her daughter in an ageing vehicle to a school much further from home.

“At the time, I was driving a 1999 Mitsubishi Galant, and it was very hard to lift her out of her wheelchair and put her in the car, then put the wheelchair in the trunk.”

“Through the grace of God, a work colleague helped me to get a Noah. Then someone else bought a motorised wheelchair in Canada and shipped it down, and then built and installed a specialised ramp for the van.”

With a new mode of transportation and a school that facilitated Faith’s challenges, academic success seemed attainable.

The first subject Faith developed a liking for was art and craft, as her subject teacher, Mr Tomlinson, did everything he could to ensure she was comfortable and present at class.

“He was like a fatherly person to Faith. Her art classes were upstairs, and he would get assistance for Faith to be lifted up the stairs.”

This made Faith feel very included and it motivated her to participate in other classes. It also gave her the confidence to communicate more with her classmates. She would find ingenious ways to convey messages to them, such as via hand signals, writing on paper, or in online chat groups. All this had a positive effect on Faith’s grades, which was very evident in subject like physics.

“Mr Wadsworth, her physics teacher, was another person who really looked out for her. Whenever she was struggling, he would sit down with her and explain the topic. Even in her fifth-form year, he would let her stay in the lab and practise until I picked her up.”

This investment in Faith helped to keep her focused as she sat eight subjects at the Caribbean Secondary Education Certificate level. Though the experience was gruelling, she would spend long hours going over topics to ensure she understood them. In the end, she passed five subjects: English language, social studies, agriculture science, English literature, and electronic document preparation and management. This was an accomplishment which her high-school community and family were very proud of, and it was showcased by the rousing applause she got at her graduation ceremony.

Now, Faith is doing several courses at the University of Technology with the aim of becoming an animator.

‘Above it All’ highlights youth who have found a way to persevere despite extenuating circumstances. For questions or comments, email: yl.jamaica@gmail.com or social media @kareemlatouche.