excels while helping mom who lost both legs 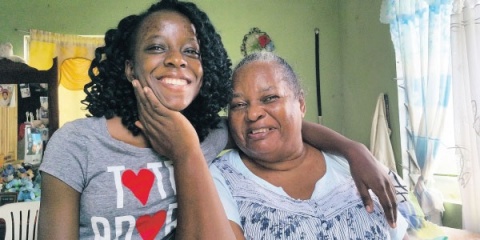 Lasconia HYATT has always been a fighter since her premature birth at Hargreaves Memorial Hospital, where she was born two months before her due date. The Albert Town resident had a very active childhood even though she did not socialise much.

“I didn’t have a lot of friends, so I would spend most of my free time playing with my adopted brother, Dillion,” reminisced Lasconia.

During her formative years, the two were inseparable as Dillion, who is two years older, would incorporate her into every sport he played. “Everything he did, I did too. We would play a variety of sports, like cricket, where I would both bowl and bat. At the time he was my closest friend,’ she disclosed.

NO MORE FUN AND GAMES

She took the same jovial spirit to Albert Town Primary and Infant School until her mother, who was a shopkeeper, got a minor stroke when her daughter was in grade three.

“She had a very high blood pressure because she ate a lot of salty food and sugary drinks, which led to her having a mini stroke,” Lasconia revealed.

Unfortunately, the initial diagnosis was much worse than the family had thought, as her mother got a second stroke within a few months.

“This one was major, as one of her hands couldn’t function property and she could not recognise anyone in the hospital room,” the concerned daughter said.

The experience left a young Lasconia traumatised as she went home from the hospital in tears, clutching the hands of her older sister, Jerilyn Thompson.

She started to pray for her mother’s recovery as she recalled all the fond memories they had shared.

“After she closes the shop and I come home from school, we would talk for hours. She told me a lot of her stories growing up and I found them exciting.”

HAVING A HARD TIME FOCUSING ON SCHOOLWORK

Naturally, Lasconia’s grades started to fall, as she found it hard to concentrate. However, she tried her best to be positive about the situation, especially when her mother came back home after spending a month in the hospital.

“When she came back, she could walk a little, and even though only one of her hands could function properly, she still wanted to do her motherly duties. She would comb my hair, but it wasn’t done properly, and when i went to school, students would laugh at me, which made me cry,” she recalled.

Nonetheless, Lasconia was inspired by her mother’s determination and found ways to help out around the house, while a family friend would come by several times a week to provide assistance. This drastic change in her mother’s physiology took a financial toll on the family, as they had to close her shop permanently. This also had serious implications for her sister, Jerilyn, who was finishing college to become a nurse.

“Things became really hard on us, financially, but fortunately I was able to get on the PATH programme and we got money every three months from the Ministry of Labour and Social Security,” stated the 16-year-old.

During this ray-of-hope period when she was in grade five, she started utilising the Internet and educational games to improve her learning. “I knew I wasn’t the brightest, so I had to come up with techniques to remember stuff. I like to search YouTube when I don’t understand something, so I did that a lot. I even made up rhymes to remember certain topics,” she recalled.

By the time she entered grade six, her grades were steadily climbing, and she was seeing incremental improvement based on her study techniques. However, she was hit with another emotional setback as her mother experienced another major stroke.

“This one was horrible, because half of her body was dead, so she was partially paralyzed. She couldn’t do anything for herself, so I had to step up big time,” she stated devotedly.

As for her adopted brother, Dillion, he took the news badly and sunk into a bout of depression which made him become aloof and unpredictable. “The first time she got ill, he started straying, and when this one happened he became unrecognisable to me. He did everything to stay away; he would sleep under trees or in people’s yard,” disclosed a sad Lasconia.

This wave of misfortune made it hard for Lasconia, who was to sit GSAT in a few months. Not one to easily give up, she mustered up all the strength she could find to support her mother as well as study for her exams. “I got all 70s in my GSAT, which made me cry because I wanted to do much better.”

Nevertheless, she was encouraged by her mother and sister to not focus on her GSAT grades but, instead, seize the opportunity to go to a new school.

“I had to come to grips with my situation and realise that the only way I could escape poverty and support my family was through a good education,” Lasconia said.

With this mentality, she was determined to start a new chapter at Troy Hill High School with her eyes on the prize. “The first thing I started doing that summer was reading. I remember when I went to orientation I read all the material they gave me, whether it was the rule book or the book list, it didn’t matter.”

This approach quickly paid off as her grades skyrocketed to an 80% average and earned her a spot on the school’s honour roll in her first term. “I was so proud of myself, as well as a little nervous too. They put us on a stage in the auditorium and gave us Black Forest cake and drinks; plus, we had to sit there and eat it while the principal told the other students that if they worked hard they can experience the same thing,” remembered Lasconia.

Within this same year, her mother’s legs were amputated, which added an even greater responsibility to her shoulders. “She got a cut and it spread, which caused her entire leg to become infected. This was a bit challenging on me as well, because sometimes I had to get her out of bed, and I have a small frame. Luckily, there were YouTube videos with instructions that helped me to find effective techniques to get this done.”

HITTING A BUMP IN THE ROAD

All this left her with little time to bask in her success throughout the academic year, but at least she had begun to open up and meet new friends. By the start of her third term, Lasconia was beaming with confidence where her academics were concerned, but she believes this did not work in her best interest. “I was becoming complacent, thinking that I never had to study as hard to maintain my grades. This led to me falling off the honour roll in my final term.”

Not one to wallow in despair for too long, Lasconia used that summer to go back to her drawing board and started to tweak aspects of her life to obtain her former glory. Since then, she has remained on the honour roll and also ended up with the highest school average while in grade nine.

“I got a 86.6 with a 3.2 GPA, and my father and sister came to my prize-giving ceremony, which made me proud. When I went home that night, I knelt beside by mother’s bed and read my certificates to her, and it made her so proud,” declared Lasconia.

All this has taught the young woman how to be self-motivated. Despite having a gruelling daily schedule, she is always early to school and makes no excuses. “I wake up every morning at 5:30 a.m., look after breakfast, wake up my mother and lift her out of bed, have devotion and get ready for school. By 7 a.m., I am outside waiting on a taxi,” disclosed Lasconia.

She is now focused on finishing her school-based assessment so that she can carry on with her elite academic streak. “I want to get all ones, because I know it will make my mother happy as well as put me in a position where I can further my education,” concluded Lasconia.

‘Above it All’ highlights youths who have found a way to persevere despite extenuating circumstances. For questions or comments, email: yl.jamaica@gmail.com or social media @kareemlatouche