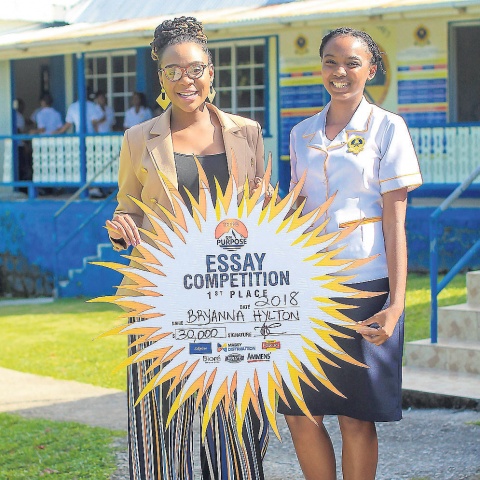 Jamaica is currently poised for Vision 2030 – a strategic road map geared towards making Jamaica the place of choice to live, grow, start businesses and raise families. Hence, with the current goal at hand, standing for justice, brotherhood and peace shouldn’t be a question for our youth – it should be their priority. Of course, no one is telling them to step into crime-prone areas and demand action – that’s preposterous! However, a goal was set for the development of our country, and in order for this set goal to be achieved, there needs to be cohesiveness among all the stakeholders of the isle – inclusive of both youth and adults.

So the question stands, why should youth stand for justice, brotherhood and peace? In other words, why should the persons who will be tasked with handling the affairs of Jamaica in the next 10 years promote fairness and impartiality in the operations of the island? Why should the future of our isle stand for feelings of friendship, support and understanding between people? Why are we to encourage adolescents (and young adults) to live with the concept of harmony and the absence of hostility? Now, when put like that, the question seems extraneous – the answer is obvious. The future belongs to the youth and, well, the future of Jamaica is Vision  2030. Thus, indirectly, the achievement of Vision 2030 is dependent on the youth.

The vision is not entirely dependent on the actions of the prime minister or governor general. In fact, within a few years, those persons will be off the scene and new persons would have to be elected to maintain the vision. Instead, it is the action of the youth that will dictate the realisation of Vision 2030. Without their creative, diligent work or generous and honest thinking, the increase of our country in beauty, fellowship and prosperity is compromised.

Brotherhood, justice and peace are only the first step. Our youth should not just stand up for it. They should breathe peace, speak brotherhood and sweat justice. They should embrace love and loyalty. Wisdom and courage should be laced in their interactions. Strength and vigour should govern their every move. They should have a purpose – a Vision 2030 purpose.

In essence, a goal was set that is dependent on the conduct of our youth; on their humility  their cooperation, their impartiality and their harmony. Why should youth stand up for brotherhood justice and peace? It’s simple – these attitudes are needed for the achievement of the ultimate Jamaican goal.

Yet, 58 teenagers were arrested and charged with murder in 2017. Data compiled by the Jamaica Constabulary Force show 78 teenagers arrested for shooting, 148 for illegal possession of a firearm and 63 for robbery with aggravation, all in 2017 (Robinson, 2018). For Elan Powell, assistant commissioner of police, Jamaica’s teenagers are in need of special attention, as they are being attracted to the life of crime.

This now births a much bigger question – how? How can 16- and 17-year-olds stand for attitudes as germane, yet difficult, as support, fairness and harmony in a society where at least three persons are murdered each day? The answer to this is not half as simple as the why. In fact, the operational means of any idea is sometimes the hardest to conjure. However, for something as important as the achievement of Vision 2030, some amount of brainstorming would have to come into play.