The art of Photography 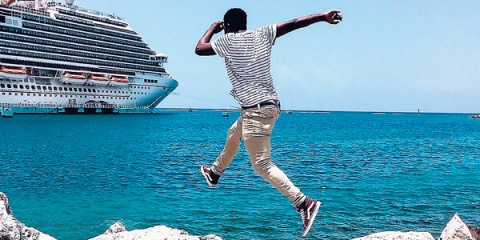 Creating Art is perhaps one of the greatest things that someone can do for their soul. Art is a way in which someone can express their thoughts and emotions that cannot be done through regular communication. Of course, art comes in many forms, with drawing, painting, sculpting, and writing being the more traditional ones. However, in recent history, there has been a rise in popularity of a relatively new form of art – photography. Photographs can be used to report events, tell stories and express unspoken thoughts.

These are concepts that 19-year-old Leniel Rose is more than familiar with. For him, photography is more than a simple hobby. It is a passion, although up until recently, the idea of photography wasn’t even on his radar. According to Rose, it was not until he started attending school at the Brown’s Town Community College, where he is still enrolled, that he became interested in photography. When he first began photography, he used it to cope with his insecurities. Before photography, he constantly compared himself to others, even completely deleting his Instagram posts at one point. After a for photography. Since then, his desire to continue his art has only grown stronger. As a result of being an artist, he is also subject to criticisms from others, but he does not allow that to get him down. “I didn’t let others’ opinions get me down,” he said, while speaking about the initial wave of negativity that he received. He uses it to fuel himself, proving others wrong in their doubts and misconceptions of him. He always advises people, using this philosophy: “Do what you love and love what you do, no matter how stupid it looks to others.” In other words, don’t allow the opinion of someone else who doesn’t fully understand you to upset you. He focuses his energy positively by trying to inspire and bring joy to other people, particularly on the platform of Instagram. Rose also feels differently about the various individual types of photography, his two favourite being nature and fashion. He typically sees his approach to nature photography as landscape, plants and sea being used to create art. He also likes using fashion to create art, because the art of style is another passion of his.

He sometimes finds a way to incorporate the two forms to create artistic pictures. Perhaps the biggest irony during his time as a photographer is that his best edited photograph happened by mistake. While playing with the different features of a new editing software that he had been introduced to, he accidentally touched a filter that changed the entire image. He fell in love with the photograph, and it is his personal favourite to date. Unfortunately, editing is not usually that easy. While editing can be uplifting, giving someone a sense of accomplishment at seeing the finished product, editing sessions can be painfully long, taking hours to complete. “You aspire for perfection, and no one is perfect,” Rose stated, emphasising the frustration that comes with work not being up to one’s standards. The best thing to do when frustrated, he says, is to stop and give it a break, to do something else. Frustration will only be counterproductive. Probably the most surprising thing about him is that he does not want to become a full time photographer, editor, or even a fashion designer. He wants to become a computer programmer; the reason being that he loves math and computers. “I always, from a tender age, loved to work out math problems in my head,” he said, recalling memories from his childhood. He went on to say that when others had technological difficulties, he would be there to help them. Regardless of what he decides to become, his art will continue to inspire others, as he does not plan on putting down his camera any time soon. Art is, after all, an extension of one’s self. It becomes a part of who you are. Although he is more than just a photographer, photography is a part of who Rose is. For those interested in Leniel’s photography, his Instagram name is @lenielrose.