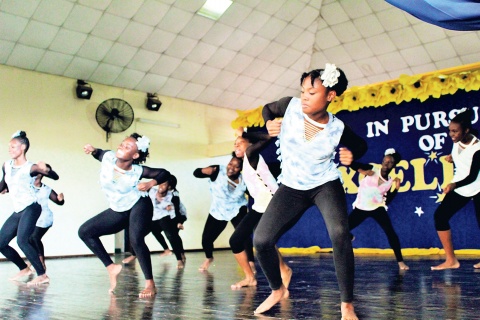 Members of the CMA Dance Troupe.

The Convent of Mercy Academy’s Season of Excellence started with a bang on November 7, as students, parents, teachers and well-wishers gathered to celebrate the achievements of the ladies of the academy under the theme ‘In Pursuit of Excellence’. The ladies of the academy sat, expectantly awaiting their awards, in the ambience of the beautifully decorated McAuley Hall. In attendance were the Central Kingston Member of Parliament and Opposition Spokesman on Education Ronald Thwaites, and his wife, Marcia Thwaites – an Alpha alumni; the Archbishop of Kingston, His Grace the Most Reverend Kenneth Richards; Board Chairman Joyce Archibald; education officer Mrs Sharon Smith-White; PTA President Anthea Ramsay Waisome; and members of the alumni association.

members of the alumni association. His Grace Kenneth Richards, very profound in his opening remarks, admonished the audience, “Be wise and know what to do with what you know.” The school song and the Suscipe of foundress Catherine McAuley were sung zestfully by the awardees, joined by their alumni sisters, creating the perfect air of solemnity over the occasion. The reflective mood was momentarily broken by the Alpha Dance Troupe. The audience could not conceal its excitement during this rendition, dubbed ‘I Believe’. The hall erupted with cheers as the audience joined in the spontaneity. The dance troupe provided a mixture of local and international beats and choreography.

In her address, Principal Kali McMorris, overcome with pride, lauded the school for being a place where “mercy lives”. She noted that the school was permeated by the “spirit of mercy”. which is embodied in the mantra of DJSASHI, an acronym for discipline, justice, service, academic excellence, spirituality, hospitality and integrity. The awards ceremony was therefore a celebration of students who demonstrate these qualities.

For their academic excellence in 2017-2018, students were awarded for outstanding performance in the regional CXC examinations at the advanced and general levels. At the advanced level, the school gained 100 per cent pass in 95 per cent of the subjects done, while at the general level 88, per cent of the cohort passed at least five subjects, including mathematics and English language. Two students also gained recognition for outstanding performance in external examinations, nationally and regionally. For Unit 1 entrepreneurship, Myosha Williams was ranked first in the island and fifth in the region. For Unit 2 geography, Trudy-Ann McLean placed fourth in the island and fifth in the region. Students were also awarded for their outstanding performance in the internal examinations.

Several awards were given for outstanding performance in various sports and co-curricular activities. There were also special awards in honour of persons who have served the academy with distinction. One such award was the Sister Bernadette Little Award for Excellence in Leadership, which was received by the head girl, Donjah Pommells. The Principal’s Award was presented to Tiana McLean, who exemplifies the qualities of DJSASHI.

Chief among the awardees was Board Chairman Joyce Archibald, who was recognized for her many years of sterling service to the academy. Archibald, an Alpha alumnus, stated, “If they (the awardees) emulate the values of mercy exemplified, they can’t go wrong.” She also noted that the academy has made her who she is today, and encouraged those who did not receive awards to keep trying. To illustrate that the mercy charism upheld by the Convent of Mercy Academy is justified in scripture, Archibald’s citation quotes Micah 6:8: “He has shown you, O mortal, what is good. And what does the Lord require of you? To act justly and to love mercy.”

As the curtain came down on this awesome event, the school choir rendered a beautiful and fitting song, Bless Me. The audience filed out quietly with the words of the Suscipe still resonant in the atmosphere: “O God we are yours for time and eternity, we are Yours forever”.

– Article contributed by the Convent of Mercy Academy Alpha Reading and Journalism Society.