ABOVE IT ALL: Finds success after losing his mother to cancer 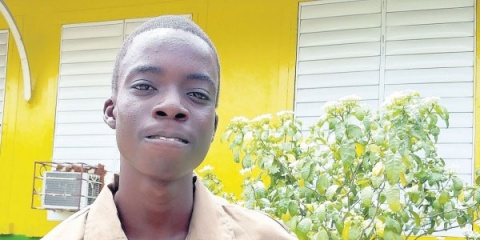 Growing up in the inner city of downtown Kingston has never been an easy task, but the pressure of the hardship has created many social diamonds. The path to success can be a daunting one, as it is riddled with lack of resources and opportunities. This is the environment from which Cleon Campbell hails. The west Kingston resident is known by his neighbours as a quiet, non-problematic boy, but a fire burns deep within him.

“When I was younger, I loved football. Every day after school I would go home and play with my friends. I even played for my primary school, Central Branch All-Age, at one point,” recalled Campbell.

His early upbringing consisted of him living in a tiny, two-bedroom house with his three siblings and mother. This represented simpler times for Campbell, who enjoyed the company of his siblings and the fact that they were a close-knit family.

THE BURDEN OF BAD NEWS

This jubilant family feeling quickly dissipated when his mother was diagnosed with stage-four cancer while he was in grade three. The initial diagnosis took an emotional and financial toll on the family, as the nine-year-old Campbell could no longer afford to go to school consistently.

“It was rough on us because we are a poor family, but I had to step up as his older brother. I told him he had to stay focus because I don’t have a skill or a trade so, at times, the money [was] ration,” said Dwight Murdock, Campbell’s older brother.

Campbell heeded his brother’s advice and tried to stay focused after his mother passed away only a few months after her diagnosis. Since then, it has been financially hard on the family, as everyone has had to contribute to make ends meet. Campbell has taken the hardest hit as he was left without a mother and could not afford to go to school many days. This trend would continue from primary school into high school.

CANNOT AFFORD TO GO TO SCHOOL

Especially in first form at Kingston High School, his financial situation caused him to be constantly absent or late. “He was more absent than present at school in seventh grade, and this aroused our suspicions that something was not right, especially given the fact that he was not a problem child, in the sense that we did not have any behavioural issues with him,” disclosed Mrs Joyce Samuels-Walters, career guidance and work experience coordinator at his school.

After doing some investigation, both Samuels-Walters and his grade coordinator recognised that he was having challenges at home and needed some intervention from the school. “We sat down and spoke with him on several occasions, but he was very hesitant to speak about his mother. Nonetheless, we found out, through his brother, that she had passed away and it was rough on the family, financially,” Samuels- Walters explained.

This prompted her to devise an intervention plan to put Campbell back on the right path. “Fortunately for us, when Cleon was in grade eight, FLOW Foundation chose our school to have their Recharge Programme, which helped students with social development as well as maths and English,” disclosed Samuels-Walters.

This, along with the financial assistance provided by both teachers, proved to be a turnaround point for Campbell, as his attendance improved from 46 per cent to 96 per cent. “He became excited to come to school because of the Recharge Programme. The sessions were very exciting, and they would take the students on trips to the various museums in the vicinity,” she continued.

The exposure had a multiplying effect on Campbell, whose grades started to improve, to the delight of all the persons who were supporting him. “On his end-of-year report in grade eight, he got the highest average in the school and our principal awarded him for being the top student; his average jumped from 61% to 80.5%,” beamed a jubilant Samuels-Walters.

Naturally, this took an unusually reserved Campbell out of his element. “I felt an upsurge of euphoria. My sister collected the report at school and came in the house and gave me the news. Mi know seh I was going to come first based on how I was performing, and she bought me a phone,” he elaborated.

Samuels-Walters was beyond elated. “What I love about him is that he is not a troublemaker and he is very honest. There are times when I am giving him lunch money and he would say to me, ‘Miss, I got money from Mr Bell yesterday and I still have change left over, so you don’t have to give me any lunch money today’.”

With his meteoric rise, Campbell shows no signs of looking back, as long as he continues to receive the support he has been getting.

“I want to get a higher average and be on the honour roll again. This will help me to accomplish my dreams of becoming a programmer or software engineer,” Campbell boldly declared.

‘Above it All’ highlights youths who have found a way to persevere despite extenuating circumstances. For questions or comments, email: yl.jamaica@gmail.com or social media @kareemlatouche.